Bill Walton is almost as well known for being a deadhead as he is for his accomplishments on the basketball court. His passion for the dead is oft noted, and he was known for working in appropriate snippets of lyrics to dead songs during interviews after games. He continues to espouse his love of Grateful Dead music even as he continues his basketball career as a well known and respected tv announcer.

Recently the crew at GD Productions created the Grateful Dead Hall of Honor, and Bill is the first inductee. As a member of the board of the dead’s non-profit group, the Rex Foundation, he demonstrates his involvement with the dead scene is more than just that of a serious fan.

Find out more about the award, and read a short interview w/Bill at his web home. 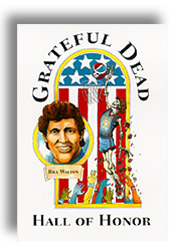