Just why is it that so many attempts to study Mars up close and personal result in apparent failure? Everyone has their own pet theories, many of them involving martians of some sort. Well, maybe not.

In any case, “they” don’t always win (Viking, 1975; Pathfinder, 1997) and now we’ve completed the initial phase of our first successful Mars mission since the summer of 1997!

Spirit, one of two (the 2nd is named Opportunity) Mars Exploration Rovers scheduled to land on Mars this month, has successfully landed and is in communication with tracking stations on Earth.

The Mission Status Center is providing timely updates, sometimes just minutes apart. As I’m typing this entry, data, including the first images, is now being received from Spirit. What’s interesting is that the rover is no longer in view of the Earth and so must communicate with us by first relaying the message to the orbiting Mars Global Surveyor, a survey ship orbiting Mars.

Here’s a mirror of a collage of the first images from the rover: 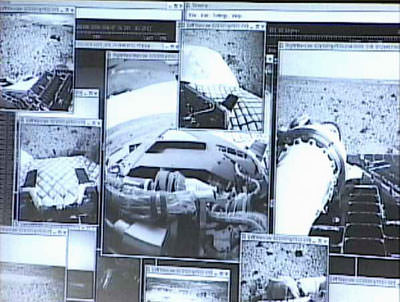