We recently returned from a fairly long family visit in Kansas. Unlike many of our recent road trips, this one wasn’t documented via this journal. There were many, now irrelevant, reasons for that and though I’d like to go through the few hundred trip photos and create a travelogue, realistically, that’s probably not going to happen, at least not in the near future. What I’ll do instead is pick out some of the best shots and present them on an occasional basis.

One of my favorite image compositions is an object fully lit by bright sunlight, set against a background of dark, swirling storm clouds. I’ve had some success doing this with a sunflower, and on our most recent trip to Kansas caught this brilliantly lit grain elevator in a small town in far Eastern Colorado. 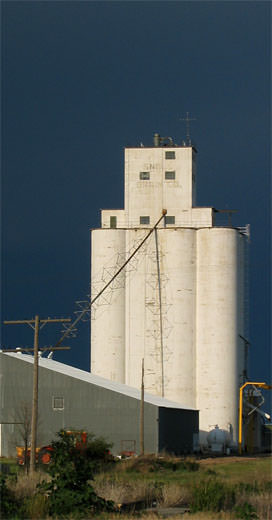