Seeking a new photographic challenge, I took a number of pictures at at the local high school football game Friday evening. Some of the best shots are shown below, and the rest are visible at my Smoky Valley football photo set on Flickr. Smoky Valley beat Council Grove 14 to 7; their early offense (and interception!) made for some great photo opportunities. 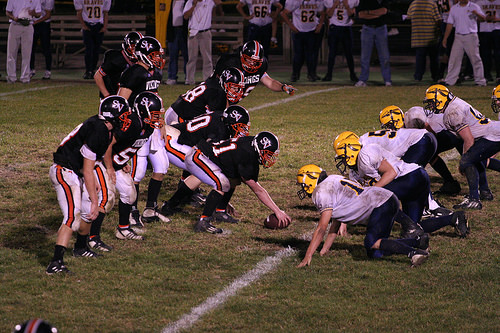 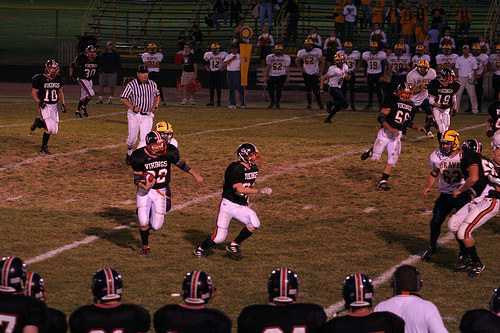 I was sitting around the 30 yard line, about two-thirds of the way up in the stands. I moved closer to the field for a few plays, but like the angle better from the higher vantage point.

The images were taken with a Canon Rebel XT camera, using a Canon 70-200/F4 lens. The reach of the 100-300/F5.6 would have been appreciated, but the quality of the 70-200 is so much better that there’s no real comparison. In any case the camera’s field of view means the lenses are really magnified by 1.6, so the the tightest shots were effectively done at 320/F4.

The ISO was set to 1600. There was enough light that I was able to set the shutter speed to at least 1/200. As a result, the images are relatively sharp, and most of the blur is due to motion blur or a lack of focus, not camera shake. The relative lack of noise at 1600 is simply amazing!

As noted, this was a new challenge, and while the results were pleasing, there’s also plenty of room for improvement.