Yesterday Lindsborg celebrated the annual Swedish holiday known as Midsummer’s. For the second year in a row, I provided publicity for the event, and once again it was a wonderful, challenging and rewarding experience. You can read more about the details of Midsummer’s at Little Sweden, USA.

As might be expected, I took a few pictures yesterday. Well, more than a few. Actually, the most photos I’ve ever taken in one day. Starting around 9am and continuing until almost 9pm, I took around 925 photos!

I’ve been looking at them off and on since last night (can’t do much else as I somehow blew my knee out; it’s swollen up the size of a softball), and am making progress in sorting and categorizing my Midsummer’s photos. I had some operator difficulty during one of the dance performances, and ended up with way more motion blur than intended, but it was still a learning experience. Overall, though, I did get a number of photos that I really do like.

During the day the lighting wasn’t ideal, with spotty cloud cover as well as shade from the trees in Swensson Park, but adjusting the white balance has helped a bit. The shots I took in the evening were actually some of the best due to the quality of the light at that time of day.

I’m not done sorting and rating, but so far at least 40 images are destined for the trash can, with at least that many more to follow. On the other end, of the 200 photos of the Mora Folkdanslag, at least 35 to 50 are keepers. I expect to find many good ones of the Norwegian Society of Texas and the Lindsborg folk dance groups as well; it’s just a matter of working my way through them.

For those interested in the technical details, I’m following a simplified workflow based on that recommended by the DAM book. I first keyword my images, and then rate them. I choose one star as the rating for keepers, or ones to display on the web, and use the recommended 7/yellow, 8/green for probably and definitely delete. Using the filmstrip view in Adobe Bridge, I can crank through 50-200 images at a time making the initial assesment. Another tip is to first search for a subset of the images before ranking.

For now, I’ve posted a couple of Midsummer’s images on my photoblog, luminosity, and over the next few days will be posting more images there, here and on Flickr. In addition to the online postings, I’ll be providing CDs of the images to our guests from Sweden and Texas.

I’ll close this post with a photo of the Swedish folk dance group from Mora, Sweden: the Mora Folkdanslagen, dancing under the Maypole on a beautiful Midsummer’s Eve in Lindsborg, Kansas: 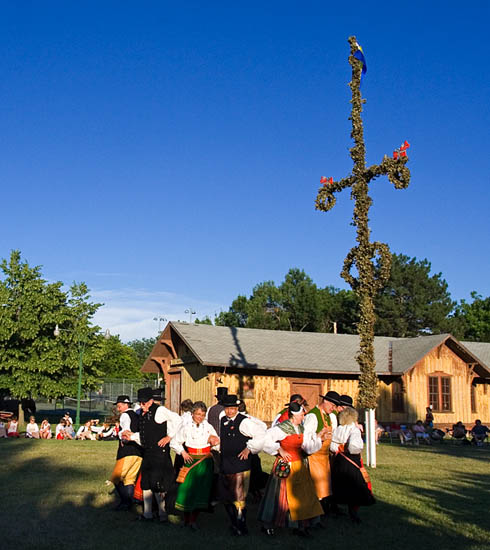