My dad, father of 7, died on Tuesday. He was 84. We held the funeral service today.  Dad was retired Air Force and he was honored with a Military Funeral including Honor Guard, an honorary volley of shots, the flag ceremony and Taps.

I thought it would be tough during the playing of Taps; I didn't realize that when they handed me the flag there would be an accompanying short speech.  I almost broke down when she got to the bit about the message being from the President, extending his thanks for dad's service.  Whew, that was heavy.

Update: I found the text used during the flag presentation.  I was also reminded that the Airman went down on one knee as she handed me the flag, placing my hands "just so."  The gesture, along with the words, made it a powerful moment.

On behalf of the President of the United States, the Department of the Air Force, and a grateful nation, we offer this flag for the faithful and dedicated service of Sgt John R. Rodriquez.

During the past few days I've posted a number of photos celebrating dad's life.  There's a set of photos on Flickr, including some from the flowers at the funeral home and of the Honor Guard.

I also posted a video slide show of photos of dad on YouTube.

My brother Steven wrote a nice piece on his blog.

My family, including daughter, grand-daughter, brothers, sister and nieces have been active in honoring dad's life and memory on Facebook.  It's been great to read their remembrances and see him from their perspective.

Our family has been supportive of each other and as we get older we continue to reconnect and get to know each other as we once did 40 years ago.  I was glad for their presence and support today.  We are also thankful for the many friends who attended today's funeral and wake.

Here are a couple of photos from today, followed by a piece I wrote as a remembrance and tribute to dad, a very special person who has shaped my life immeasurably and through his example and expectations helped become more than perhaps I believed myself capable of when I was younger.  Thanks dad, for everything. 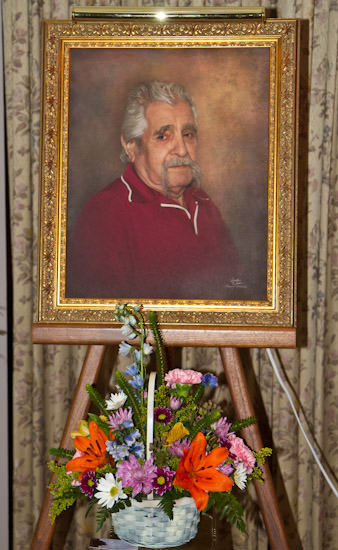 Father to many, friend to all.

John Rivera Rodriquez, 84, former resident of Lindsborg and McPherson, passed away in Lyons on the 6th of July 2010.  He was born on January 8th, 1926, in Pearl City, Hawaii to  Micaela (Rivera) and Innocencio Rodriquez.

John lived a long and interesting life.  Due to circumstances he was raised by his grandparents in Hayward, California. As a young man, age 13-14, he worked on San Francisco Bay fishing boats.  He joined the US Navy during WW2, only to be kicked out when they found out he was only 15 when he enlisted.

While serving in the Air Force in the mid-50's he met and fell in love with a local Kansas girl known as Patty. The rest, as they say, is history.

Dad served as a cook in the Air Force until his retirement in the early 1960s.  He and his wife Pat traveled quite a bit during this time, including a two-year stint in Spain.

He loved taking his 3 kids on various adventures while living in Spain; camping along the Mediterranean and driving through the Alps were just two of the highlights.

In 1963, after retiring from the Air Force, John and Pat moved their family, now including a 4th son, to Lindsborg.  He lived there until the late 1970s and during this time finally got the 2 girls he had been wanting.

After a series of jobs he settled in at Certain-Teed Plastics manufacturing in McPherson where he performed duties as an extruder operator, making plastic pipe.  He took good care of his family though it often took a lot of overtime hours.

In 1979 John and Pat moved to McPherson where their final daughter was born.  At that time the boys were mostly moved out of the house, so John and Pat had a house full of girls for a few years.

By then, there were a few grandchildren, all girls, and they made Grandpa John's eyes twinkle with delight when they came around!

In later years, he retired from Certain-Teed and enjoyed time puttering in his yard and visiting with his extended family. He also loved fishing.

Known by all of his family and friends for his love of family as well as his sense of humor, he will be deeply missed. He was an inspiration to us all; his duty to and love of family will always be remembered.

The family suggests that memorial donations be given to McPherson County Humane Society in loving memory of John.

On behalf of the entire family, a special thank you to Kevin at Stockham Family Funeral Home.  He and the rest of the staff are truly masters at performing a very tough job indeed.