I got a call today regarding the repair of the heater in our 2003 Toyota Highlander. They wanted $850 dollars to get things working again; almost $700 of that was for the "heater control head."

Background: we've had problems for years where the heater would come on, full blast, and would only turn off when we rapidly jiggled the thermostat control. We mentioned it many different times when bringing the car in for routine maintenance and were always told "can't fix it if it ain't broke; bring it in sometime when it stays broke."
So as we're chatting I reminded the dealer of this history. He took a little off of the price so I told him to go ahead and order the part. I mean it's almost winter. In Kansas. A heater is non-negotiable. And to their credit they were going to give us a free loaner overnight as the part had to come from Kansas City.
But then I got to thinking. I know that on occasion Toyota has had systemic problem with different functions on various cars over the years. I googled "highlander heater control head (HCH)"; and the very first entry led to a web forum where there were 21(!) pages of discussion about the broken heater and how it could be easily repaired.
All of the discussion and photos led to the realization that this was something I could do myself! I called the dealer and had them cancel the order for $700 part. I then spent 40 minutes removing the broken HCH, too long soldering the broken wires back in place (hey, it's been a while) and then less than 20 minutes reinstalling everything (not counting the time spent looking for the lost nut!)
What's going on is a design flaw, pure and simple. The thermostat potentiometer (pot) is connected to the logic board by 3 short wires. Did I say short? They are so short that if the pot moves, even a little bit, one or 2 of the 3 wires breaks off.
There's no excuse for such a shoddy design.
Anyway, to wrap things up, I had to replace the lost nut with one from my Fender telecaster volume pot (thank you Leo Fender!), but the car is put back together and both the heater and air conditioner are working fine.
And you know, the thing is that after a while it wasn't about saving the money. It was about not spending $800 dollars to solder 3 lousy pieces of wire! Here's the link to the first page of discussions about this well known problem (how well known? Well, why do you think they didn't fix the problem when the car was under warranty? Uh huh, I thought so):
Highlander Heater Control Discussion Thread
Here are a couple of pictures showing the broken wires and one of the gaping cavity in the middle of the car while it was being repaired: 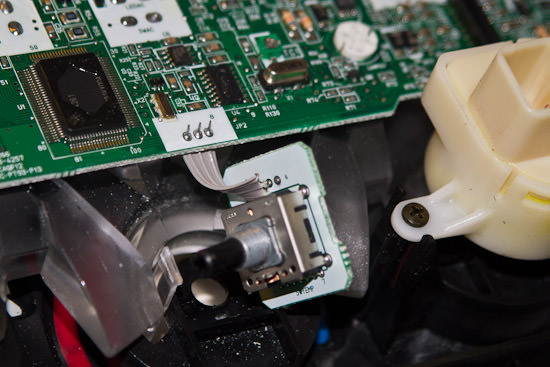 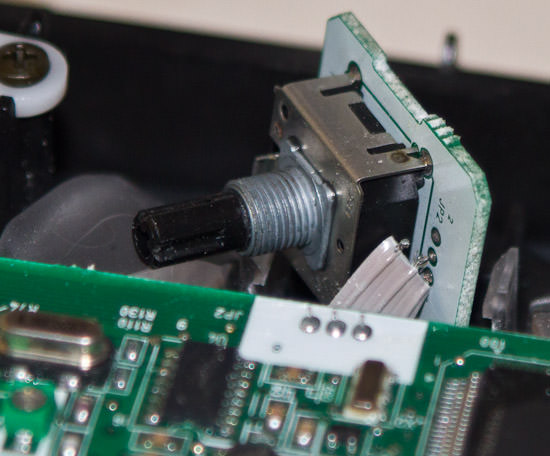 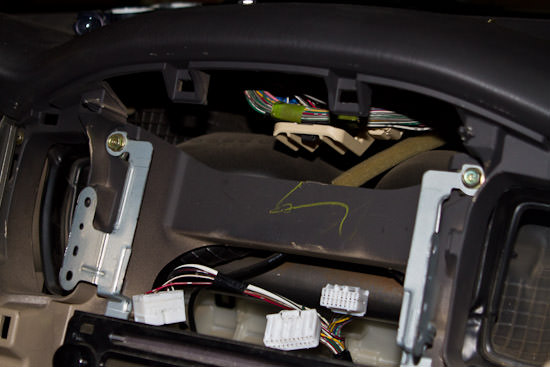