On Veterans' Day, my thoughts turn to those who haven given the most in service to our nation.  As a peace-time vet, I did not face the threats that too often result in so much anguish for veterans' families.  In that sense both I and my family are lucky.

As a veteran, I will never, ever absolve those who wasted young men's lives when they could not bother to serve themselves when it was their time. Their words and action show them to be men without honor.

Mere thanks to those who served and especially to those who gave the ultimate sacrifice in defense of our country is woefully inadequate, but it's all I've got.

By the way, I found this poem to be very powerful and evocative of that moment when one receives the news they've been dreading.

You, whose forebodings have been all fulfilled,
You who have heard the bell, seen the boy stand
Holding the flimsy message in his hand
While through your heart the fiery question thrilled
"Wounded or killed, which, which?"–and it was "Killed–"
And in a kind of trance have read it, numb
But conscious that the dreaded hour was come,
No dream this dream wherewith your blood was chilled–
Oh brothers in calamity, unknown
Companions in the order of black loss,
Lift up your hearts, for you are not alone. 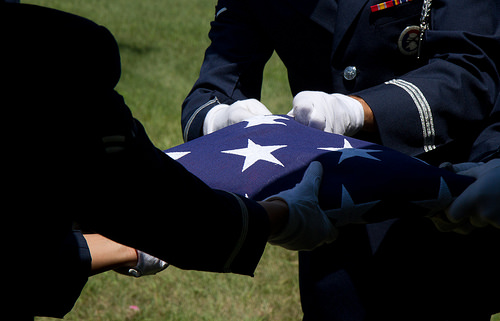