I've been thinking about getting a Fender Princeton Reverb for some time, and lately had been considering the benefits of buying a clone, primarily for the increased quality of components.

When I came across a used copy of the relatively obscure Chicken Picken' amp for sale at a good price I decided now was the time. The owner of CP Amps informed me that the design is a pure BF Princeton clone, though access points and a pot have been added to measure/adjust the bias. 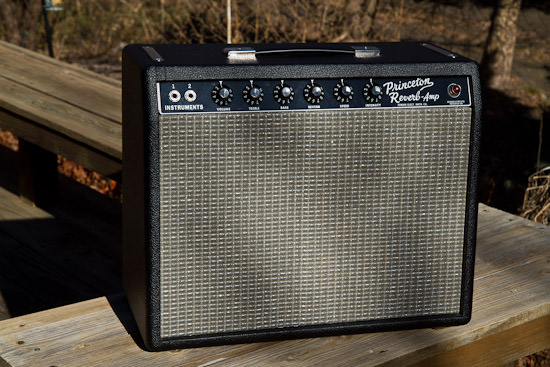 The original owner replaced the face plate and also upgraded the speaker.

After a couple of hours of use, here are my initial impressions.

Short version: I love the sound!

I've not played through a Princeton before, so I had to twiddle the knobs a bit at first to get the sound I wanted.

I'm surprised how strong the reverb is; my only other point of comparison is a Blues Jr, which isn't saying much.  I found going above 4 was just way too much.
Same w/the tremolo, which I've never used before. Whop, whop, whop!
Anyway, w/the volume at 7, treble at 9, bass at 4, reverb, speed & intensity @ 2, I like it!  Of course, that's extremely loud, especially w/my Les Paul (less so w/my tele), so I dial down the volume on the guitar.

It seems to have more "strength" (for lack of a better word) than any of my other amps. I may be wrong, but I attribute that to the Mercury transformer (as well as the premium components.) Just a tightness/taughtness in the lower registers that is very nice.

The notes have a nice timbre, and overall there's just more fullness compared to my other amps.

Now, compared to small amps like my SF Champ, it's hard for me to get much in the way of distortion at reasonable volume levels. The Blues Jr, w/the master volume, does have the advantage there. I understand the Princetons take pedals nicely, so for now I'll try different pedal "clones" via my Digitech RP250.

Anyway, though this is my first Princeton, it's not my first amp.  It *is* the best sounding amp I've ever owned, so I'm really happy about that!