It’s been far too long since I’ve posted an interesting astronomy photo, and the one below, though subtle, is very beautiful.

One of the fascinating things about this image, besides the moon Mimas (or is that the death star?) visible down in the left corner, are the long dark lines that are visible on the atmosphere of planet; they are shadows caused by Saturn’s rings.

Once again I’m in awe of just how clever and resourceful humans can be; it’s quite a scientific feat to take a photo millions of miles from earth and send it back for us to view.

More information is available by clicking on the above image.

As a bonus, here’s a preview of a very interesting image, also taken by the Cassini spacecraft. Click on the image to see a larger version, plus an expanded description. The complex image shows part of Saturn’s rings in the foreground, and then a variety of shadows and light caused by the rings and the Cassini division. 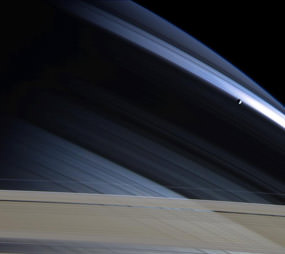